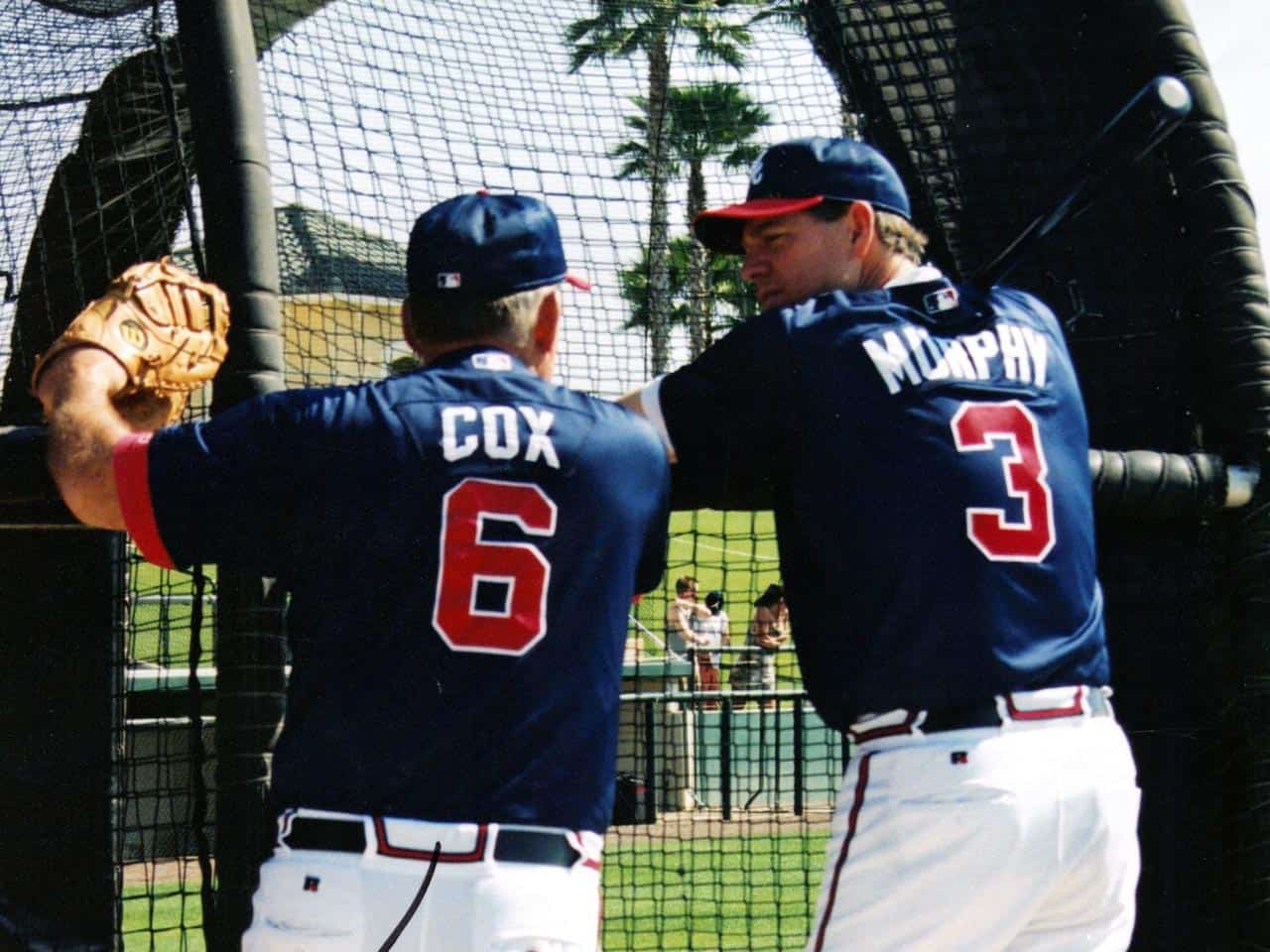 I just wanted to post a quick thank you note to Bobby Cox, whose number was retired this weekend. I’ve said it before but I’ll say it again: there are a lot of people to thank for giving me the chance to play in the major leagues, but you, Bobby, are at the top of the list. Nancy and I and the kids couldn’t possibly thank you enough for all you’ve done. That said, here’s my best attempt.

First and foremost, thank you for having confidence and patience with in me early in my career. My journey to the big leagues was a bumpy one at times, but it would have surely been bumpier had you not had the foresight to put me where I needed to be—in the outfield. After my escapades as a catcher and first baseman, no two ways about it—moving me to the outfield saved my career.

I’ll never forget getting that phone call from you in the fall of 1979. Nancy and I had just been married in October, and we didn’t really know where my career was headed. I’d been hurt off and on through the 1979 season, plus I’d been playing catcher and first base, and I don’t need to remind anyone how that turned out. I was running out of options in the infield–it was really looking like my career might end before it even began. We were visiting family in Utah that fall and you called to say you were thinking about moving me to the outfield, and I remember feeling so excited about the idea. It gave me a lot of hope that things were going to finally change for the better. You found a home for me, so to speak, in the outfield—where I stayed for many years to come.

If someone would have told me, say, in 1977 that I’d make the all-star team in 1980 as an outfielder, and that I’d go on to win five gold gloves there, I’d have never believed them. But Bobby, you went the extra mile to make it all possible for me. You and John Mullen put me on the roster as an outfielder, and even made room for me as a starter by trading away former AL MVP Jeff Burroughs. I couldn’t believe you had that kind of confidence in me, and I always wanted to live up to that. I know I’m one of many that you believed in against the odds early on in their career. But I’m sure thankful I was one of them. Looking back, I know you saw something in me I don’t think I even saw in myself. And for that, I will forever be grateful.

Saying ‘thank you’, Bobby, is not nearly enough when I think of the impact you’ve had on my career. And the move to the outfield was only one way you changed the course of my life. There are hundreds of other ways—too many to name here–that you’ve made me a better player, a better teammate, and a better man. What you’ve done for me, Bobby—I’ll never forget. Thank you for everything.

*Note to all coaches of all sports and all players of all ages. Take a look at Bobby Cox’s success, his players’ respect for him, and the way his players consistently played hard for him over the years. Bobby didn’t motivate by humiliation, punishment, or fear. He motivated his players and got the best out of them by respecting them, communicating with them, and encouraging them. He believed in them. In other words, Bobby knew the secret to good coaching—loyalty coupled with respect. He was on our side as players, and we knew it. Too many times coaches at all levels try to inspire excellence in through humiliation and intimidation. (I have seven sons and one daughter who have played—and some who are still playing—sports. Believe me, I’ve seen it all.) These kind of coaches may get short term performance gains out of their players by treating them that way, but in the long term it always takes its toll. (I mean, really, doesn’t “inspiration through intimidation” just sound like an oxymoron anyway?). Great coaches don’t command respect—they endear the respect of their players by respecting them first, treating them like people, and keeping things in perspective. That’s what Bobby did. Coaches—remember, you are there for your players, not the other way around. Your players are not there to make you look like a great coach. Instead, you are there to be a great coach and a mentor to them no matter what—win, lose, or draw. The idea that you have to be a yeller and a screamer to motivate your players simply isn’t true. Think about the long term impact you’re having on your players (especially those of you who coach kids.) You will win games—and you’ll lose a few, too, but so what? You’ll be changing lives for the better for many years to come. And isn’t that what it’s really all about? Just ask Bobby Cox. That’s what he did. And now, when the last game has been played and his managing days are over, he can look back and be proud of the legacy he’s left behind.