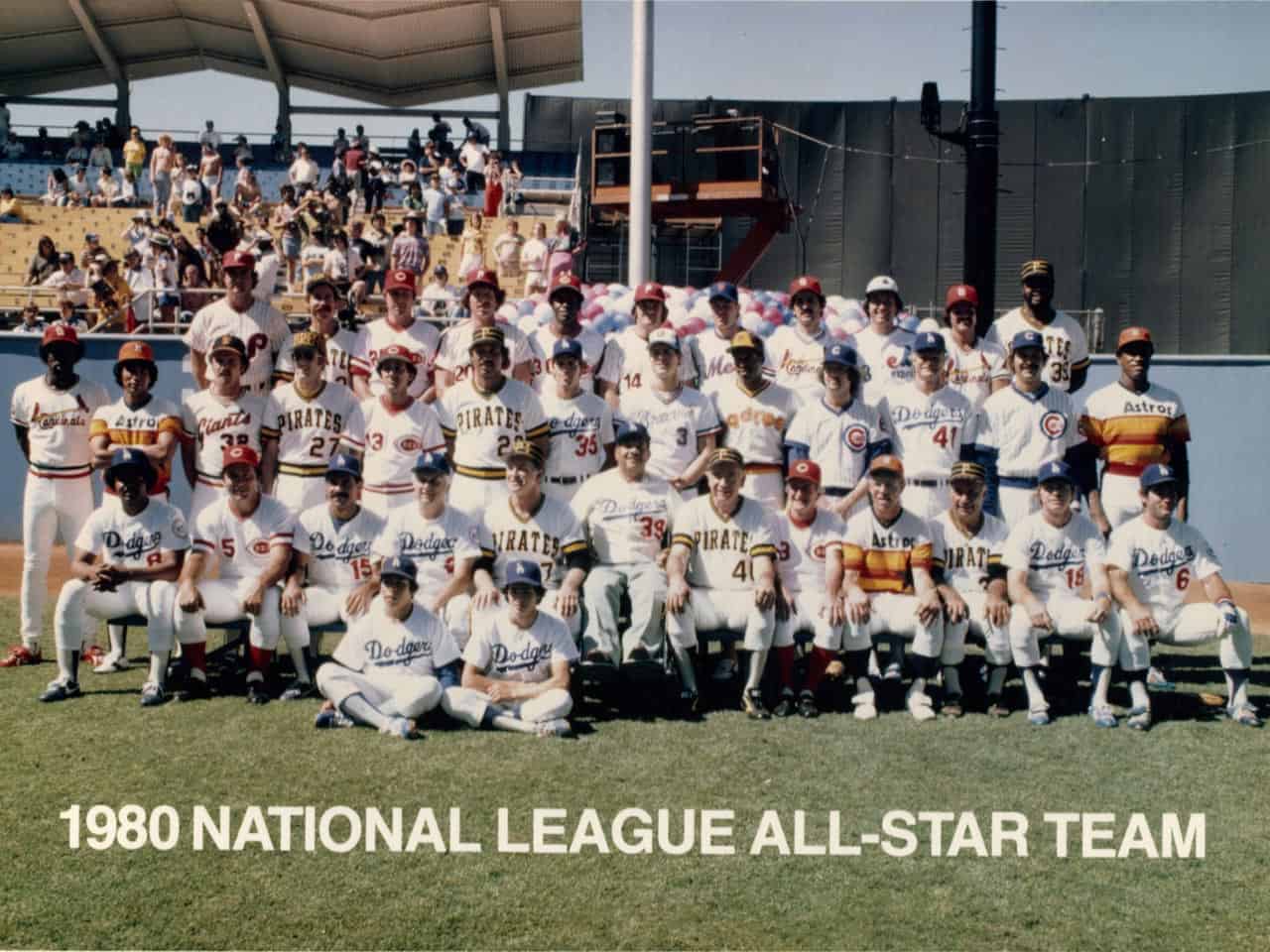 By Dale MurphyJuly 21st, 2021No Comments

(And why MLB has the best all-star game)

My first all-star game was in 1980 at Dodger Stadium. It was my first year playing centerfield, so making the all-star team really confirmed for me that I’d found a home in the outfield. It was such a thrill to be out there with so many great players, many of whom I’d been watching on TV as a high school kid not that long before. Johnny Bench, for example, was the starting catcher for the National League that year, making his 13th all-star game appearance. Steve Garvey was making his 7th appearance, and Pete Rose, his 14th. J.R. Richard was our starting pitcher, and before the game I remember thinking the AL guys had absolutely no chance of hitting him (not only was J.R. one of the toughest pitchers around, but the game started at 5 p.m., which meant the shadows would make seeing the ball even more difficult than usual). And I was right: J.R. got through the first three innings pretty easily, if I remember right. Ken Griffey hit a home run and was named MVP—little did I know I’d be playing with him on the Braves a few years later.

I was lucky to get in the game that year, which doesn’t always happen for everyone (I remember that Jose Cruz, for example, didn’t get in the 1980 game). I played centerfield for a couple of innings and also got to hit against Goose Gossage. Well, I say “hit,” but I think I just tapped a little dribbler off the end of the bat, right back to the mound. (I did hit a pretty long foul ball right before that, though).

One thing I’ll never forget about that day was a brief encounter I had with Pete Rose in the tunnel between the dugout and the locker room. As I was walking back he stopped me and said, “Hey congratulations on making the All-Star team, Murph.” Then he continued: “Remember, though, don’t do anything any different out there tonight than you would during the regular season.” Right then I had this image of Pete running over Ray Fosse to win the 1970 All-Star game, and I knew without a doubt that he meant what he said. It was a perfect example of Pete’s attitude toward the game.

This leads me to one of the reasons why I think Major League Baseball has the best all-star game in professional sports. Baseball all-stars (on average) really want to do well in the game. In my experience, I never really got the feeling that there was anyone out there that didn’t want to win. I was fortunate to be on a lot of winning NL teams, but when we lost it was tough to take. In the 1983 game at Old Comiskey Park, for example, we got pounded by the American League, and it wasn’t easily forgotten by any of us, believe me.

There’s another reason, I think, why the MLB All-Star game has an edge on other sports. Given the nature of the game of baseball, players almost have to treat it like regular season game. Unlike many other team sports, baseball’s a game of one-on-one episodic play wherein the course of a game can drastically change every single time the ball’s in play. As a player, then, you can’t ever just not play defense. Pitchers aren’t ever going to throw half-speed nor will shortstops ever just not dive for a close ball. You could slack off, of course, but not without it being totally obvious that you’re phoning it in. In football, though, I’d argue it’s much easier to blend in if you’re not giving 100% on defense, as we’ve seen in the Pro Bowl. In the NBA All-Star Game, it’s even something of a norm to play as little defense as possible. To be fair, I don’t really blame NFL players for not playing full-speed defense in the Pro-Bowl—they go through so much pain and injury in the regular season already that they’re bound to slow down a little bit in an exhibition game. In fact, in my opinion the Pro Bowl should go the way of the dodo. Why not hold some sort of big awards banquet or golf/bowling exhibition with NFL players instead? I’d bet fans would really enjoy this sort of televised event, and I’d suspect players would welcome the change.

Baseball is fortunate to have a system of norms and rules that keep defenders on their toes, and the MLB All-Star Game is all the better for it, both for fans and players alike.